Thol Wildlife Sanctuary more popularly known as ‘Thol Bird Sanctuary’ which is a ‘Bird’s Paradise’ is a habitation of waterfowls and other birds from across the countries. The bird sanctuary though lesser known than Nal Sarovar, is spread on an area of approximately 7kms. and gives a very soothing and satisfying birds' view to all the bird lovers.
Due to its popularity amongst the bird fraternity, the area was notified as ‘Sanctuary’ in November 1988 under Sec. 18 of Wildlife (Protection) Act, 1972. Since that time it has become a favorite picnic spot for travelers and also to the residents of Ahmedabad and nearby areas. 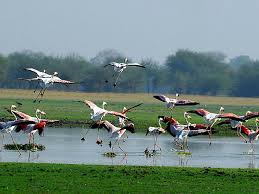 Thol Wildlife Sanctuary has a Thol lake which is a shallow man-made water reservoir built by legendary Vadodara ruler Sir Sayaj Rao III Gaekwad to command 1450ha of agriculture land in 1912. The lake has a water storage capacity of 84,000,000 m³ (68,000 ac•ft) and command area of 1450 ha (5.6 mi²) and catchment area of 153 km² (59 mi²). The wetland is predominated by the open water habitat, which is surrounded by cropland, fallow land and scrub land.

The easy life of birds at Thol Wildlife Sanctuary can be seen with a wide range of native birds as well as migratory birds. Many winter visitors like Great White Pelicans, flamingos, a variety of waterfowl including Mallards and large numbers of Geese, Sarus Cranes and many other waders are common site at sanctuary. Siberian cranes are known to visit the lake during winter.
One can  have an eye-catching view of Black winged stilts, Ruddy shell ducks, Comb ducks, Spot billed ducks, King fishers, Pied kingfishers, Purple sunbirds, Sulpher bellied warblers, Southern grey shrike, White tailed lapwings, Sociable lapwings, Whisteling teals, etc. 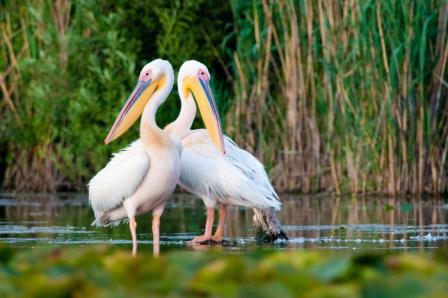 Thol Wildlife Sanctuary is bestowed with ample reeds to nest & roost and hundreds of millions of insects in water & tones of grains on the farmland to feed thus welcoming domestic and migratory birds in hoards.

While traveling to Thol Wildlife Sanctuary, one encounters ‘Gau Shala’ – cattle shelter at Dhabla. A walk into the place, gives a direct sight of Tawny Eagles, Egyptian Vultures, Greater Spotted Eagles and Steppe Eagles. These birds flock at the cattle shelter as the place gives a stunning view of dreaded cattle. Hundreds of dead cattle in various stages of decomposition lay scattered all over the place. Though it gives a scary feeling but from bird’s point of view it is warm and required. Anyone with tender stomach can skip visiting to this place and can straight away drive to Thol Wildlife Sanctuary.


Location and How to Get There: It is located in Mehsana District at some 30Kms distance from Ahmedabad. One can reach their by road. Though there are plans for laying of railways to Thol Wildlife Sanctuary, but the decision is on hold as many are objecting for it could affect the lifestyle of birds.


When to Get There: Pre-rainy season or anytime between November to February as many birds flock to the place during winter season. Summer might give disappointment as Thol Lake gets dried during that season.

Timings and Entry Charges: The Thol Wildlife Sanctuary opens early in the morning and closes by around 5.00 pm. The sanctuary charges entry Rs.100/- per person and little more amount for carrying camera and vehicle. The vehicles can be carried up to a distance of 3kms. and then they shall be parked before the Thol lake. One must be prepared to walk endlessly to admire beautiful birds.