Sarkhej Raza mosque is the most visited tourist hot-spot in Ahmedabad. With historical relevance, it also displays architectural brilliance of those times. 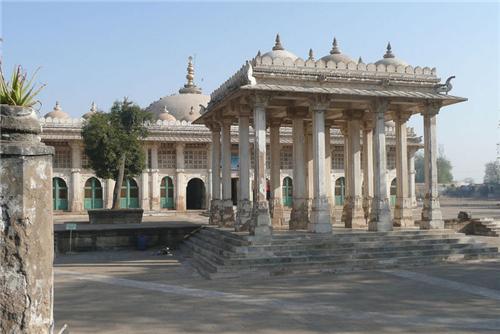 Sufi saint Shaikh Ahmed Khattu Ganj Baksh who was a friend and advisor to Sultan Ahmed Shah (1410-1443 A.D.) in his later years spent his life in Sarkhej which is 10 km south-west of Ahmedabad. After the death of the saint Mohammed Shah has ordered to build a mausoleum in his remembrance together with a mosque.

Started with 72 acres of land currently Sarkhej Roza stands on just 34 acres of land due to local encroachments. Qutb'ud-Din Ahmed Shah, the successor of Mohammed Shah has completed construction of both the structures in 1451 A.D. Sultan Mahmud Begada completed the complex and also constructed a small mosque in the later part of 15th century.

Also a mausoleum and a garden were constructed later and the place has become a summer resort for the royal family. Though there are many rozas across Gujarat Sarkhej has become one of the most prominent and famous due its relation with the saint Ganj Baksh.

Unlike other monuments built during this period, Saekhej Roza has an architectural blend of Hindu, Islamic and Jain styles forming “Indo-Saracenic” architectural style.

Mahmud Begada was the main who gave the grandeur to the roza and Azam and Mu'azzam are the two Persian architects behind the architectural monument planning. The monument is often referred as the “Acropolis of Ahmedabad”.

The place consists of tombs of saints, kings and queens, gardens, mosques and palaces. This cluster of structure represents three distinct religious, royal and social features. Unlike other mosques which have arch-shaped walls and dome structures, Sarkhej Roza has thick walls and flat roof with domes on it. The main roza or the mausoleum of Saint Shiekh Ganj Baksh Khattu is at the center of the whole structure.

Spreading over an area of 35 sq. m. this is the biggest of all the rozas in Gujarat. The tomb of the saint is supported by thirteen pillars and provides a pleasant and peaceful atmosphere. Along with this the mosque inside this structure constitutes the religious realm. The mosque has spacious courtyard, colonnades and prayer halls which can be occupied by hundreds of people. Sunlight on these structures creates beautiful impressions. The structure was built mostly on pierced stone trellises and people can find very less number of arches.

The tombs of royals and the palace remind the grandeur of the sultans but do not overshadow the tranquility of the place. The royal tomb of Mahmud Begada and the majestic mausoleum stands as an architectural marvel. The tomb is huge, largest and also elegantly designed with lattice work. Besides his tomb lie tombs of queen Rajabai and other queens. The huge tank, steps and pavilion remind the social realm of the place. Large number of people gathers at these places during festivals and other occasions. Royals used the tombs and palaces while common people used the pavilion, water tank and platform.

With lot of historical significance Sarkhej Roza is something which needs to be felt and cannot be expressed in words. Ahmedabad Community Foundation (ACF), an organization based in Ahmedabad together with Sarkhej Roza Committee is actively working on revival of the monument and is also planning to set up an art gallery helping the tourists and the local people.