One of the finest place to be visited at Ahmedabad is Sanskar Kendra located opposite to Tagore hall. Sanskar Kendra is presently owned and taken care by Ahmedabad Municipal Corporation. The building is considered as an object of displaying articles of artistic and cultural importance. 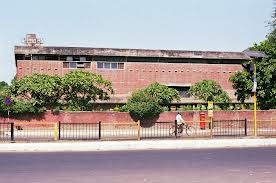 Sanskar Kendra in Ahmedabad was established in the year 1954 by a French architect named as Le Corbusier. The building was designed with an idea of displaying articles relating to education and knowledge. Hence named as ‘Museum of Knowledge’ during the designing stage of building. Initially it was designed as a small part of Cultural Centre and comprises of separate divisions for
Out of the plans so designed, the museum alone was built and used for exhibitions.

Sanskar Kendra is designed to protect the premises from hot temperature. The building rests on a pilotis signature admeasuring eleven foot high. Through the pilot one can easily enter into an open court with a large pool and then to a ramp that leads to the exhibition. Necessary precautions are taken to protect the visitors from excess heat of the day. The roof of the building consists of more than 45 basins of water to a depth of forty centimeter each. The water in the basins protects the entire building from temperature prevalent in the city. The water in these basins is mixed up with special powder which enhances the size of the plants grown. The roof were made up of reinforced concrete and waterproofing with sand.

The ground floor of Sanskar Kendra is crowned as Kite Museum. The said museum is founded by Mr. Bhanu Shah in 1985 who collected fascinating kites since he was 21 years old. He contributed all of his collections to Ahmedabad Municipal Corporation and founded the said museum.
Kite Museum exhibits varieties of kites such as kites with mirrors, Kites with garba dances, Japanese Kites namely Rokoku etc., Kite museums also houses miniatures relating to Radha and Krishna.


Sanskar Kendra also has a ‘Chabutaro’ at display aging 120 years. Chabutaro refers to a tower kind structure constructed for the welfare of birds. In this structure birds such as pigeons will reside and breed. Such a structure will usually found in villages. Chabutaro serves as a place for old aged people to chat with each other and kids to play.

The Ellis Bridge named after Sir Barrow Helbert Ellis was shifted to Sanskar Kendra Ahmedabad so that it could be preserved here well. The foundation stone holds lots of significance as it represents important aspects of history.

Information you can use: