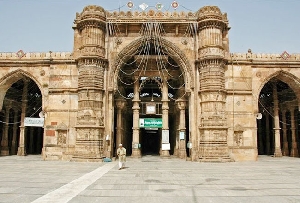 History About the Mosque

During 15th century, Muslim king named as Ahmad-ul-Umri-Turkoman collected all the poems of Rani Rupmati and included in the work of her story. Later, the piece of collection was passed on to the future generations of the king and reached  C.E.Luard who translated it into English under the title ‘The Lady of the Lotus –Rupmati , queen of Mandu- a strange tale of faithfulness".

Rani Rupmati Mosque is constructed by Sultan Baz Bahadur. And he named the mosque after his beautiful wife Rani Rupmati. The architecture of the mosque is a combination of Islamic and Hindu style and designs. The combination can be visualized from the domes which depict Hindu style and the prayer halls which depict Islamic culture and designs.
The mosque is designed and characterized by three domes and each such dome is supported by a separate brilliant pillar. The mosque is known for its Indo-sarcenic architecture.
Each of the domes is connected to each other with a help of flat roof. The domes are placed in such a way that it allows sunlight inside the entire mosque. When one enters through the entrance, one can have a magnificent views through the windows located in the balcony.
Some of the mosques located next to Rani Roopmati mosque are
These mosques are known for their well-structured minarets. However Rani Rupmati Mosque lost many of its minarets in the earthquake occurred during 18th century.


Present State of the Mosque

In the present context, Rani Rupmati Mosque is considered as a symbol of love, music and Monument in the city of Ahmedabad. Moreover, the mosque is named and famed as Masjid-e-Najina making it a unique artistic and cultural monument representing love and music.

No doubt, Rani Rupmati Mosque is an embodiment of love and poetry symbolizing 15th century’s lifestyle is a place to view, nurture, enjoy and care for.