Ahmedabad being one of the oldest and the planned cities of Gujarat is also known as the judicial capital of the state. Despite of its varied culture, it is regarded as one of the most developed metropolitan cities of this country. Ahmedabad is economically one of the fastest growing cities, which also arises the view of the law and order formula of the well planned and managed state of this city. 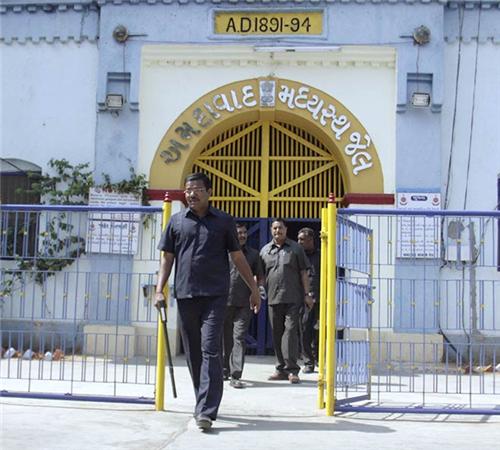 Gujarat is said to have around 26 prisons which includes approximately around 12,000 prisoners including the under trials, detainees and convicts under the state of law. The Central Jail in Ahmedabad is the oldest and well maintained prisons of the city. The Central jail also known as the Sabarmati Central Jail is guarded heavily with stony walls resisting the prisoners to disconnect all the inks to the outside world.

The Central Jail in Ahmedabad

It consists of approximate inmates of around 2,635 inmates residing in it. Though they are believed to be convicted of different severe crimes, Ahmedabad government takes necessary steps to not only control their behaviour but also improve their life style after they get released.
The prisons in Gujarat suffer a huge problem of overcrowding. As the ratio of inmates seems higher than the accommodation capacity if the jails, the Central prison of Ahmedabad too falls in this category.
The jail is said to have the accommodation capacity of around 2,586 inmates whereas the latest record shows of 2,635 convicts residing in this territory. This might work out to the negative point of the prison of Ahmedabad yet it is in the path of growth getting its overcrowding rate lower with each passing year.

It works hard in allowing its prisoners to start a fresh life after they get released from their term. The women prisoners here are accustomed to learn tailoring. 50 sewing machines are said to be donated by NGO’s along with skilled trainer that gives them a zeal to start a new life on a positive note as well as this regular work has allowed them to have a minimum sum of money to save while working being in the prison.

Welfare Programmes for Inmates of Prisons in Ahmedabad

They are entitled to follow the daily yoga sessions. Yoga is a method that allows not only the human mind but also the human body to calm down and work actively. Experts’ advices in regular practise of yoga, which makes the body to respond towards the positive energies and increases the resistance against the negative and default powers.
The regularity maintained by the prisoners in the yoga sessions has duly drifted their mind from the criminal senses to lead a life on the positive notes. ISKCON played a leading role in imparting the knowledge of yoga and spirituality deliberately distributing around 6000 copies of Bhagwat Gita around the prisons of Ahmedabad.

Out of the 26 prisons of Gujarat, 23 have added a new definition allowing its prisoners to study and complete a postgraduate course in value education and spirituality.
The prisoners with all their vigor work hard to leave a mark in this path. Around 79 prisoners have received the post-graduation certificate passing with flying colors. The Central jail of Ahmedabad organized the convocation for all those 79 prisoners who enrolled their names in setting a new goal in their life.

Other than vocational courses, the prisoners are also allowed to study various other courses in the distance education mode under various renowned universities operating in this country. Different NGO, government and corporate bodies has allowed the prisoners to sharpen get enlightened with the computer knowledge that are extensively being followed now in the prison.
A renowned distance education university recently is said to have enrolled around 287 jail inmates in different professional courses across the city of Ahmedabad. Some 120 prisoners in the Central jail of Ahmedabad has been imparted a course on hair styling.


Appeal for Books Donation for Prisoners

The Gujarat government’s appeal in donating books for the prisoners residing in jails has been taken up with vigour as the huge amount of donations has finally created libraries for the prisoners to impart knowledge through the choice of their books. Regular supply of books and magazine has never let them feel aloof from the outside world.

Campaigns taken up by different NGO’s of Gujarat has made the prisoners of Ahmedabad to get fully aware with the prisoner constitutional and legal rights. Permanent legal aid cell has been organized in the Ahmedabad central jail allowing the prisoners to get notified on prisoners’ rights.

It has got its new telephone booth which came into function in the year 2011. Bread, butter, soap, detergent powder, liquid soap, phenyl, ink, paper, dairy products and various other things that are regarded as the daily used products are being manufactured extensively in these prisons.

Ahmedabad as have seen an extensive rate of growth in all its sectors has also worked positively in moulding a better life for the prisoners. The literary campaign organized by the government has allowed 15,530 prisoners to let iterated out of the 16,327 existing prisoners.
Believing in not to stop till you achieve your goal, this city of Gujarat has been awarded as the best and the safest city to stay in India.

Explore more about Administration in Ahmedabad