Ahmedabad is a city that is situated on the edges of River Sabarmati and it lies in the northern part of Gujarat and western part of India. The location of Ahmedabad is 23.03oN 72.58oE. The entire city of Ahmedabad is spread over an area of 205 square kilometers and its average elevation is 53 meters. 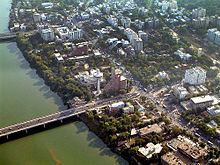 The Hilly Area in Ahmedabad

As it has been said earlier that the Sabarmati River divides the city of Ahmedabad into two distinct parts, the eastern part of Sabarmati River accommodates the old city. The old city consists of the pol scheme of houses, places of devotion and worship like mosques and temples and bazaars. The main railway station of Ahmedabad and even the General Post Office is located in the old city. The western part of Sabarmati River also flourished as a city during the colonial period and this was due to the construction of Ellis Bridge in the year 1875. This part of the Sabarmati River is the new city of Ahmedabad that accommodates modern buildings, educational institutions, residential areas that are very well-planned, multiplexes, shopping malls and the new districts of business centered at Ashram Road, Sarkhej-Gandhinagar Highway that has been recently developed and C.G.Road.

Sabarmati Ashram which is also called Gandhi Ashram is situated on the western edge of Sabarmati River in the northern part of the city of Ahmedabad. Sabarmati Ashram served as the residence of Gandhiji and it was also the starting point of the historic Dandi March that took place in the year 1930.

The entire city of Ahmedabad is very well-located and at the same time it is a city that is very well-connected to different parts of India as well as the world. All the modern facilities that are required for leading a normal life by a human being are found available in this city and at the same time it can also be noticed that the city is fast developing in its infrstructure, industry and education.

Explore more about Geography of Ahmedabad