Gujarat is a land of varied rituals, imperial figures and customs. It is the rich culture and the great history of Gujarat that has attracted people from all over the world. Gujarat is a magnificent land that has been an inspiration for people since ages. Gujarat lies in the western part of India and is basically popular for its growing economy and industries. The tourism industry of Gujarat is also considered as a jewel in the glorious crown of Gujarat. Amongst all the museums present in Ahmedabad, the N C Mehta Gallery is considered to be very important as a tourist place. Tourists from all over the world visit the N C Mehta Gallery in order to get a view of the exclusive miniature paintings. People, who visit Gujarat, should make it a point to visit the N C Mehta Gallery which is a non-descript but tremendously marvelous museum. This gallery houses miniature paintings that are considered to be rare gems of art. 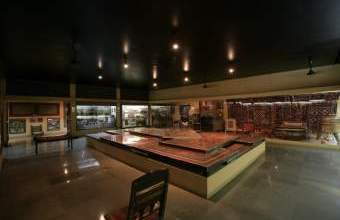 Foundation of the Gallery

In 1960, the Gujarat Museum Society was established in the form of a public charitable trust and it was established with a thought in mind. The thought was to exhibit the miniature paintings of N.C Mehta. In the beginning, the Municipal Corporation of Ahmedabad generously donated the first floor of Sanskar Kendra Building located at Paldi and it was designed by Le Corbusier. The exhibition was inaugurated by Shri Jawaharlal Nehru, the very first Prime Minister of India in 1963.

Late Shri Nanalal C. Mehta was a pioneer in miniature paintings that were found to be very famous in India. He was the member of the Indian Civil Service possessing an eye that was of an aesthete, an antiquarian’s perception and a very good background of the Hindi and the Sanskrit literature. Nanalal C. Mehta carried out the work of publishing various researches through the medium of articles and books and at the same time he also discovered various fresh documents related to Indian Paintings. Some of the documents were Chaurapanchasika, which is a painting series and the scroll named Vasanta Villasa which is considered to be a much priced possession of N.C Mehta.

After the demise of N.C Mehta in the month of May 1958, all his paintings were donated by his wife late Smt. Shanta Mehta to the Gujarat Museum Society. The main aim of the Gujarat Museum Society is inculcating the appreciation of art in the society and promoting research and study in the field of art in order to preserve the glorious heritage of the country. There are special efforts that have been made in the past and they are continued being taken even today so that a large scale improvement can be brought about in the conditions of the museums of India. The lighting and the security of objects have been given special consideration in this field.

Indian miniatures are an illustration of secular and scared works, epics, poetic compositions, darbar scenes, social senses, portraits and ragamala paintings. The miniature paintings were exchange items that were taken in the form of gifts during special occasions between courtiers and kings. The paintings are called miniature paintings because they are very small in their size and colors of indigenous minerals and handmade paper have been used in making such paintings.

chronologically. In the beginning, one will get hold of some of the earliest examples in miniature paintings like those of the Sultanate Schools and the Western India Schools. From the Indian Schools, the Jain Kalpasutra folios have been taken as examples. Pre-Mughal style has been exhibited in the N C Mehta Gallery through the Sikander-Nama and Hamza-Nama folios which are Persian epics. Next is the exclusive Chaurapanchasika series of miniature paintings that have been composed by the Vilhana, the Kashmiri poet in the 11th century. The story is, the poet Vilhana falls deeply in love with Champavati. Later Champavati’s father comes to known this fact and orders that the poet should be sent to the scaffold. As a fulfillment of his last wish, the kind allows the poet to recite the fifty verses composed by the poet. The king, much pleased by the recitation marries his daughter to the poet.
Indian miniatures also have several other famous themes like Gita Govinda love poems composed by Jaydeva, Sursagar by Surdas, Ragamala, Barahmasa; description of seasons, Rasikpriya by Keshvadasa and the epics like Ramayana and Bhagavata Purana. All paintings depicting these themes are found to be displayed in the N C Mehta Gallery.

The basement of the N C Mehta Gallery houses a collection of Rajasthani, Pahari and Mughal paintings. The paintings include the masterpieces of Nurpur, Guler, Basohli, Kulu-Mandi and several other schools. There is a striking contrast found between the rhythmic, soft, lyrical and mellow paintings of Kangra Gita Govinda and the staring eyes and glowing colors of Basohli Gita. Rajasthani paintings related to the Bikaner, Mewar, Bundi, Central India, Kota and Malwa schools have also been displayed in the basement house of the N C Mehta Gallery.

Among the various miniatures that have been displayed at the N C Mehta Gallery, most of them depict certain scenes that are particularly religious. One of the most intricate and beautiful paintings at the gallery is the one that shows Krishna and his travails with the beautiful Radha and several other Gopikas. There are paintings that also focus on the demeanors and the manners of the kings and the life that they used to lead. There are other paintings that convey the message that lovemaking was a passionate feeling in those times because most of the paintings depict the lovemaking method that was practiced in those times. However, every single subject at the N C Mehta Gallery has been handled with great attention as well as perfection with assimilation of intricacy and color. The subtle differences that lie in the styles of various regions and various ages is also notable at the gallery.

Important information that you can use: The N C Mehta Gallery is mainly a collection of miniature paintings and is located in the campus of the L.D. Institute of Indology. The miniature paintings have been collected from several sources and they can turn out to be magnificent and wonderful through a magnifying glass or even through the eyes of a lover of fine artistry.

By Road: The road networks in Gujarat are highly developed and it is only because of this reason that Ahmedabad is well connected to the other cities of Gujarat. The nearest bus stop to the gallery is Gitamandir which is located near the Paldi and kalupur railways stations.

By Rail: The main railway station to get to the N C Mehta Gallery is located in the Kalupur area.

By Air: Sardar Vallabhbhai Patel International Airport is the airport that can be used for easy access to the gallery by air.

These are the three notable ways that can be used for getting a view of the N C Mehta Gallery which is considered to be the best art gallery and museum around Gujarat. The gallery is a collection of great paintings that are miniature type and is considered to be the best in India. People, who have a very strong and keen interest in miniature paintings and art, make it a point to visit the N C Mehta Gallery in Gujarat so that they can get a glimpse of their glorious heritage. The gallery is no doubt a wonderful medium that has been used for the exhibition of several popular paintings and art that have remained very far away from the reach of the common people. The gallery looks forward towards inculcating a sense of study and research about art in the minds of the people so as to promote the artistic culture among people.


Explore more about Art and Culture in Ahmedabad