We are known for our unity and diversity and it is this diversity that makes us unique. We are all sentimental and proud of the religion that we belong to and also the monuments that are a symbol of our religion.

Whether it is a temple, a mosque, a church or a gurudwara, or any other religious landmark, we feel a sense of belonging when we enter the premises of such places. Our topic of focus today is the mosque.

The mosque is the place of worship for the Muslims who are the followers of Islam. Having their origins in the Arabian Peninsula, the mosques are now present in every Muslim inhabited area.

The mosque mostly has huge domes, minarets, and prayer areas in various styles of architecture. The Quba Mosque of Medina, Saudi Arabia is considered to be the oldest mosque in the world. 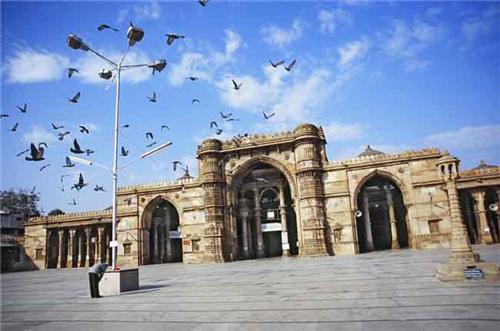 Mosques in India also are known for their design. The mosques of Delhi, Mumbai and other places are well renowned. A well known mosque of the country is the Jama Masjid of Ahmedabad. The word Jama is derived from the holy day of Friday when Muslims all over the world gather in the mosques to offer their ‘Namaz.’

The Jama Masjid of Ahmedabad was built during the reign of Sultan Ahmed Shah in the year 1424. The mosque is located on the eastern side of the historic monument of Teen Darwaza opposite the Mahatma Gandhi Road.

The western side of the mosque has the tombs of the Sultan himself, his grandson, and his wives. It has been declared as a monument of National Importance by the Government of India.

An inscription on the Mihrab reveals that the mosque was inaugurated by the Sultan himself on 4th January 1424. Its initial purpose was only for the private use of the Sultan and his family.  Later, it was opened to the public.

It is considered to be one of the largest mosques built during that era. The mosque is built on a large courtyard which is 75m long and 66m wide. The entrance to the mosque is through three sides, while the fourth side has the prayer area.

Construction and Design of Jama Masjid

The mosque is built with the unique material of yellow sandstone. The prayer wall is also covered by four domes. The floor of the courtyard is made of marble. The main prayer has over 260 columns and is supported by 15 domes where light and shadow play the game of hide and seek.

The upper portions of the arched entrance minaret collapsed in the earthquake of 1819, the lower portions are still intact. The floor of the courtyard is decorated with giant Arabic calligraphy and it also contains a tank for the religions ablutions in the center.

The Jama Masjid of Ahmedabad is known for its high quality structural design and it attracts a large number of followers for the Friday Namaz, as well as festivals of Eid, which are celebrated with great pomp and grandeur. It is certainly one of the most talked about places and one of the prides of the city of Ahmedabad.