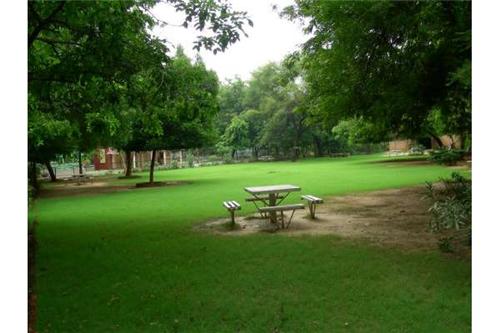 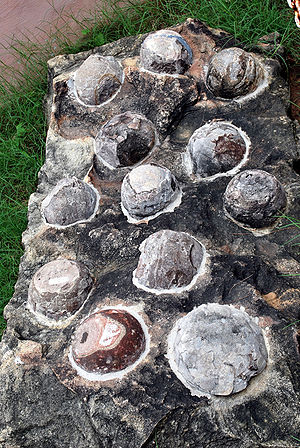 The fossils that are found in the Indroda Nature Park were originally found in the Himatnagar basin, the Songhir bagh basin, Kheda which is located in the southeast of Gujarat and the Vadodara and Panchmahal districts.
Not only dinosaurs and their eggs are found to be displayed at the Indroda Nature Park but there are a number of trees, herbs, birds, shrubs, mammals and reptiles that are also found in the park and the park serves as a habitat for the these creatures. This park is also a place of scenic beauty because of the low lying river in the background and the heaving terrain.

Area of the Park

Objective of the Park

The park aims at providing various opportunities that can help in experiencing the wilderness and it also looks forward towards protecting the endangered and rare species of birds and animals. 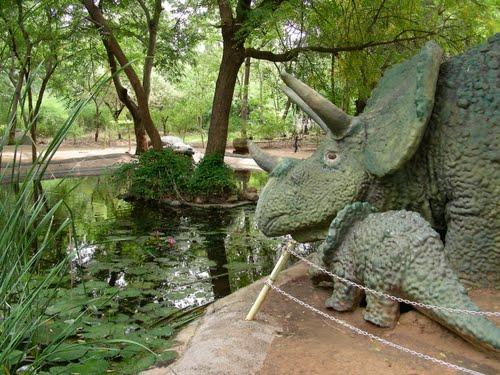 It is Gujarat’s pride that it has got an abundance of dinosaur eggs, skin impressions, coprolites and  bones in its hatcheries located at Rahioli in the Kheda district and this abundance proves the presence of dinosaurs in Gujarat in the past.
The Indroda Nature Park also possesses a section for fossils and dinosaurs in order to raise the awareness of the public in the sphere of the ancient fauna wealth of Gujarat.
The life size models of the dinosaurs along with the period details of their occurrence have been displayed at the park. Not only the dinosaur models but the fossils of a number of dinosaurs, vertebrates, invertebrates and plants have also been collected from several parts of the state and have been displayed at the Indroda Nature Park.

At Indroda Nature Park, there are a lot of mammals that can easily be spotted and found moving freely in the dense forest. The mammals that are found at the park mainly constitute of leopards, sambars, blackbucks, tigers, deer, jackals, four-horned antelopes, chinkaras and porcupines. These mammals have been kept in very large enclosures.

The marine section of the park consists of the skeletons of one dolphin, a dugong and two blue whales that have been displayed along with the detailed interpretation of their origin and growth. The skeleton of one blue whale was obtained from the Khambhat coast in 1988 and it was displayed for the public very close to the snake house. Apart from the skeletons, the fossils of various kinds of sea animals are also found displayed to bring about marine life awareness in people.

The reptile section of the Indroda Nature Park comprises of the reptiles of thirteen species of reptiles and apart from this there are about sixty eight reptiles found in the park such as tortoises, snakes, turtles and crocodiles. The main attractions of the park are non-venomous and venomous snakes and the India Star Tortoise.

Botanical Garden of the Park

The arboretum is a special collection of different species of trees that have been displayed through plantations and complete details about the plant. This section of the botanical garden of the Indroda nature park is spread over 2.5ha and it comprises of 250 species of trees out of the 327 species found in entire Gujarat.

The cactus house also forms one of the major attractions of the nature park because it consists of eighty species of cactus that have been displayed along with complete information about their habitat and their growth. These succulent plants are very beautiful and at the same time flowery and they form major attractions at the park.

The bamboo sanctum of the botanical garden at Indroda Nature Park comprises of six different species of bamboo that are exclusively found in Gujarat. This section is continuously being developed so that it can also comprise of the species of bamboo found in the western part of India.

There are 250 species of medicinal plants found in this section of the botanical garden in Indroda Nature Park. The species that have been displayed at the park are found to possess immense value in the form of medicines and they have also been tested by using them on various kinds of ailments.

KALRAV in the Park

There is a simple complex that has been established at the Indroda Nature Park which is known as KALRAV. This complex consists of various facilities like an open air stage, a point for drinking water, toilets and a beautiful lawn. The KALRAV enclave is also used for the organization of various activities that are aimed towards creating environment awareness through puppet shows, quiz contests and dramas.

Eco-Point in the Nature Park

The eco-point at Indroda Nature Park is considered as the centre where the distribution and the sale of various kinds of materials related to nature education take place. These materials consist of maps, quiz cards, periodicals, books and CDs.

The ecosystems that are found in the state of Gujarat along with their biodiversity are depicted at the Interpretation centre in the Indroda Nature Park.

There are some very important facts about the Indroda Nature Park that have to be taken into account and they are as follows:

How to Reach Indroda Nature Park

By Road: There are regular services of buses that can be availed to reach Indroda Nature park. The main bus stops are paldi and gitamandir that is close to the kalupur railway station.

By Rail: The main railway station is the one which is located in the Kalupur area. This railway station is well connected to the major cities of the state and even India. For those who are on the western bank of the Sabarmati River, they can use the gandhigram station near the ashram to reach the park.

By Air: The international airport that is located at Ahmedabad namely Sardar Vallabhbhai Patel airport can be used to reach Indroda Nature park by air.

The main objective of the Indroda Nature Park is to impart nature education and spread the awareness about environmental conservation among people and it is taking up various measures in this regard.