If you happen to be in Ahmedabad on a Sunday, you must find yourself on a rickshaw leading to the Gujari market. Come Sunday, the banks of the Sabarmati resting below the Ellis Bridge, transforms itself into one of the most unique and large market areas in the city.
Located towards the eastern side, aligning with the bridge, the Gujari or the Sunday market is a treasure trove; it has all that you can possibly imagine. In spite of being a mixed bag, you will rarely come across anything that can be deemed useless. The market sells kitchen supplies, raw materials, tools, furniture, clothing, electronics, books, antiques, poultry and a lot more. 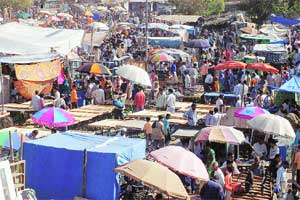 Little did Sultan Ahmed Shah, the founding father of Ahmedabad know, that his initiative would run as a tradition for centuries. Unmindful of the weather; the heat, the rains or the cold, traders set up their stalls here.
The Ravivari or Gujari bazaar has stood strong for over 597 years. Gujari meaning second-hand literally, has operated as a flea market only on Sundays, thus the name Ravivari stuck. On an average Sunday, an estimated 3,000 people visit the market.

Ahmedabad's Sunday Market can be conveniently called a trader market started in 1414. The market functions under the aegis of the Ahmedabad Gujari Association, a secular membership-based organisation. Apart from organising the Sunday market, the Ahmedabad Gujari Association also grants micro finance to regional traditional crafts persons and small entrepreneurs.
It works towards developing relations amongst craft markets and distributors. Also it documents traditional knowledge in a bid to preserve it while it looks at new modes of production too. Heavily compromising on its original space, the sunday market that once sprawled over a square kilometre by the banks of the Sabarmati, the market currently breathes between the existing buildings and the newly constructed walls of the Sabarmati River Front Development Project. This reduces the market space to approximately half its original size.
Every week the Gujari Bazaar accommodates over 1200 loyalists and 1000 ad-hoc traders. The market can be seen as the greatest example of a thriving informal sector in the city of Ahmedabad. 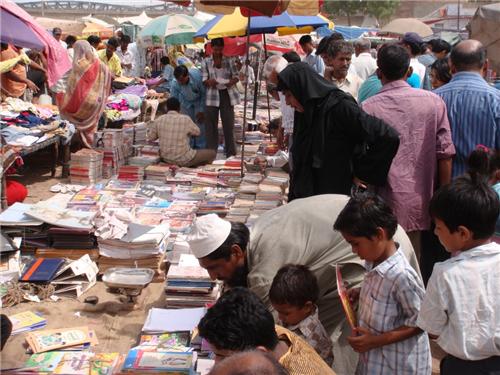 The Gujari uses the idea of an open market every Sunday, and is the source of income for over 200,000  lower-income residents approximately. The mechanism of the market works through a complex regional chain of artisan and entrepreneurs, home workers, mechanics, technicians and small traders.
A striking manuscript tells the story behind the rich, cultural, economic and social networks facilitated since the inception of this market. This documentation is a handwritten Gujarati-language manuscript maintained and updated by the Association’s office bearers who have tirelessly written this success story over decades.

The Gujari is a kind of a flea market, rousing with noise and the sheer thrill of bargaining. Indulge in guilt-free bargaining till you're satisfied with the price, and walk home with whatever you wanted.

When you walk through the Gujari bazaar, you are transported into another world altogether - where a little something from every space and time exists. The bazaar is said to have had a perennial love for all things antique and old. Things over a hundreds years of age like cameras, heaters, telephones, Remington typewriters and gizmos can be found on sale.
Earlier called the Khaas Bazaar, meaning the special market and was initially held on Fridays. It was also referred to as the Shukarvari bazaar then. The then market is said to have spanned from the Teen Darwaza moving towards where the Bhadra post office presently stands. The bazaar is said to have eventually settled at the banks of the Sabarmati in 1954, assembling on every Sunday regularly since then.