Ahmedabad touches Sabarmati river in northern Gujarat. The city covers a sandy and dry area of 205Km. The city has two lakes namely, Kankaria Lake and Vastapur Lake. Kankaria Lake with an aquarium and a zoo, was developed artificially in 1451. River Sabarmati divides the city into two parts – eastern and western Ahmedabad. These two parts are well-connected by bridges.

Ahmedabad is predominantly full of the foodie population. It is also known as the commercial capital of Gujarat. As per the census in 2011, the total population of Ahmedabad city is close to 55 lakh people, which the fifth largest in the state.
It has a total literacy rate of 86.6% which makes it the second most literate city in the state. Spread over an area of 464 Sq. Km. it has a sex ratio of 853 girls per 1000 boys, which is pretty less as compared to the national average. However, it ranks pretty high on the test tube baby part, as many couples here are successfully adopting the technique of In – Vitro Fertilization to start their families.

The only river that flows through the city of Ahmedabad is the river Sabarmati. The river gets dried up completely during summers which are very hot. It becomes mere a stream of water during this period. Once the monsoon season shows its face, this thin stream becomes a river again. 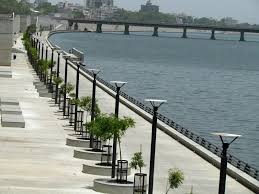 Sabarmati river hold tremendous significance as people considered it to be the most revered natural body here. Both Ahmedabad and Gandhinagar were planned across the banks of this river. One of the most iconic landmarks of Ahmedabad, the Nehru Bridge, is built over the river Sabarmati. It is also close to another iconic destination, the Kankaria Lake. Due to its significance, the Ahmedabad Municipal Corporation (AMC) decided to develop an area known as the Sabarmati River Front in May 1997. Today, it is a very important tourist destination.

Due to its proximity to the sea, Ahmedabad experiences a predominantly dry climate which is of semi – arid nature. Its humidity is on the higher side.

Ahmedabad enjoys three major seasons – Summer, Winter and Monsoon. Usually the climate stays dry, except during monsoon season when the city enjoys monsoon rains. The summers are extremely hot with temperatures ranging from 36 to 41 degrees. The highest temperature ever recorded in Ahmedabad is 47 degrees.

The best time to visit Ahmedabad is from the months of October to March, as the summers are extremely hot and the monsoon is unpredictable, ranging from no rains to very heavy rains leading to flooding in many parts of the city. Winters are pretty cool in Ahmedabad with temperatures at night fluctuating between 12 to 18 degrees. The winters are an ideal time to visit the city.

Whether the question about 'Ahmedabad being the best city to live in or not' is subjective, but a visit here would certainly send you back with a smile on your face and lots of fond memories. You will love the natural ambiance and cultural aura of the city, only to remember it forever!