Established as a city in 1411 by Sultan Ahmed Shah, Ahmedabad had its walls built by Mohammad Begda, the then King of Gujarat province in 1469, along with their respective gates. The walls looked like walls of any fort of the medieval period.

These walls of Ahmedabad saw various eras since then and over the period of time looked like they needed renovation. The citizens of the city first waited for the authorities to take the initiative and get the job done. But finally, on April 21, 1831, they decided to initiate the process on their own after enough waiting for authorities to turn up. They started the restoration work, especially those that were badly affected by atrocities of time and nature.

The citizens of the city of Ahmedabad first formed a committee that voluntarily is said to have levied octroi on Ghee they consumed. By means of it, they started raising the fund and collected approximately Rupees Two and half Lakhs. The amount was invested in the restoration process. By their this act, the British got inspired and reciprocated by spending considerable amount of money on entire restoration process by early twentieth century. They appreciated the efforts by responsible citizens of the city.

Terracotta bricks were used to build the fort wall along with materials like lime mortar and external lime plaster. Slowly and steadily, a wall of length of 10 km was built, that surrounded the city's circumference, which was good enough to protect the city from any invasion. The wall originally comprised of 21 gates and 189 bastions. Adorned beautifully with artistic splendor like carvings, and calligraphy the walls looked amazing. Many of 21 gates or darwazas were built in the Mughal era. 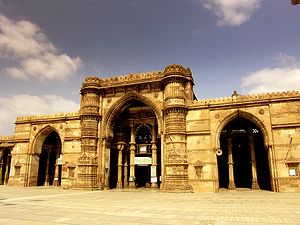 Gates in Ahmedabad - Entry Ways to a Glorious Past
Ganesh Darwaza existed in the area once that now stands under the Ellis Bridge. It was used by people to access the banks of the Sabarmati River.

The Mahudha Gate was also built in the Panch Kuva area and was used for the transit of goods.

The Kharu Gate was erected to give the soldiers an additional post.

Halim Darwaza that once stood straight in the Shahpur area, is now completely destroyed. It also was used by the soldiers to march through the city from this gate.

The Salapas Gate that was meant to be used by the Queen's convoy, stood very close to what is the Advance Talkies area in present day.

The Sarangpur Darwaza is was used as an entry and exit to for the people.

The Astodia Darwaza served as a key trading entry for the city. Dyes used to be brought into the city using this point.

The Bhadra Darwaza was used by the rulers of other states to enter the city of Ahmedabad.

The Dilli (Delhi) Darwaza, true to its name was the exit point leading to the city of Delhi.

Jamalpur Darwaza was the exit point leading to Vadodara and other cities.

Khanejahan Gate was an emergency exit from the city.

The Khanpur Darwaza led to the entrance to the king’s garden.

The Prem Darwaza was used for carrying goods in and out of the city. It was primarily used by the traders.

The Raipur Darwaza was used by commoners to enter and exit the city.

The Teen Darwaza used to lead the people to the market space.

The Dariapur Darwaza was used by the infantry. The soldiers and their convoys used the Dariapur gate to enter and exit the city.

The Kalupur Darwaza was used to bring in the food supplies to the city.

The Raikhad Darwaza was used by the people to access the Sabarmati.

The Panch Kuwa Darwaza was built much later, when the city started expanding.

The Lal Darwaza once used to stand opposite Siddi Sayyed Jali. Today, you won’t find even a trace of the gate.

How to Reach the Gates:

Most gates are in walking distance to each other. You may use a rickshaw too. Some of the gates usually stay crowded, so better avoid cars and taxis.

Quick Facts
Location: Spread all over the Old City area.
Open: Accessible all seven days of the week. Can be visited at any hour of the day.
Entry Fees: Admission is free
Photography charges: No charges