In a survey conducted by a reputed organisation a few years back, the Indians were voted as one of the happiest people in the world. It is irrelevant if we cannot afford onions anymore but we surely can afford a smile on our faces those lights up the atmosphere. This is partially because of the amount of festivals we celebrate throughout the year.

India is known as the land of festivals. Throughout the 12 months of the calender, there is always one festival which is the highlight of the month. And when you begin to see the streets full of lights, the drums begin to beat, the people are dressed at their colourful best, ready to dance on any random call of 'eyy haalo' you know that its time for Navratri!

The festival of Navratri, celebrated over a period of 10 days (the 10th day is celebrated as Dusshera), is the most iconic and landmark festival of the state of Gujarat, especially the city of Ahmedabad. The traditional dance form of navratri is the garba to which people dance to with passion, joy and happiness. The garba is a source of eternal bliss for the Gujarati populace and it rids them of any sort of tension they may have in their minds.

The word Garba is derived from two sanskrit words; one is Garbha, which means womb and the other 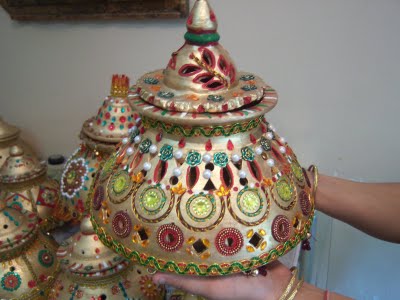 is Deep which is a small earthen lamp. The traditional dance of garba is performed in a circular motion around a centrally lit lamp which is known as deep or a statue or picture of the Goddess Shakti which is referred to as the feminine form of divinity. The dance is done to pay respects to the same.

The garba is performed in circles taking into consideration the view of the Hindus over the concept of life. As they believe that life revolves in circles from birth to death and again to birth, the dance is hence performed in circles. The picture of the goddess is placed in the center since they believe that it is the only thing that remains constant in this constantly changing word. The garba is hence a symbolic expression of the Hindu concept of life.

Another interpretation says that the garbha deep itself is a symbol of life within which the Goddess resides with her divine powers. Hence the garba is in honor of the fact that there is divine power of the Devi in each one of us. 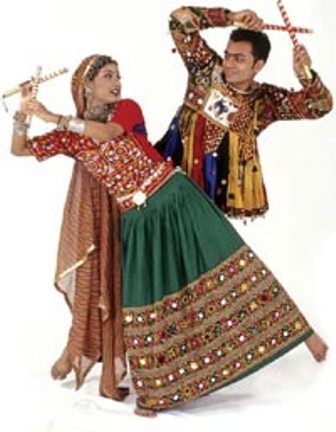 The dance performed by the men which is known as the Dandiya Raas. It is the fusion of this dance that is the modern day Garba that is seen today. The attire of the Garba is the most colorful of attires. The women wear a dress known as Chaniya Choli; a three piece attire with a flared skirt – like bottom and a dupatta which is used to cover the head like a pallu.
The women cover themselves with ornaments from head to toe during this dance in the form of earrings, bangles, necklaces, as well as nose rings and the payal. The men on the other hand wear a Ghagra along with a short kurta upto the knees and a pagdi (Head gear) over their heads.

In Dandiya, the dancers hold colorful sticks in hands as a prop and dance striking their sticks with each other's, adding the 'tik'tik' sound to music in the background. They look amazing as they bring real garba feel to the entire ambiance. These dandiya sticks come in various colors and styles to match up with the attire of dancers holding them!

The extent of the popularity of the Garba can be gauged from the fact that there are large Garba competitions organized by the Gujarati communities who are setted in countries like the US, Canada as well as the UK. The largest Navratri festival which is held abroad is held annually in Toronto in Canada.

Garba has become the identity and landmark of the city of Ahmedabad. The city completely transforms itself into one full of bright colors when it is time for Navratri. Those 10 days of the festival are the most memorable experience an individual visiting the city can have. Places like the Kalhar Bunglow, Shahibaug Club as well as NID/CEPT are some places where passes get sold out like hot cakes and people arriving late can well cool their heels outside the grounds as they get full to the brim in a matter of seconds.

You may already have had a wish to begin dancing on reading all this. So what are you waiting for, “AYE HAALO!”