Ahmedabad is a beautiful city in Gujarat located on the banks of the river Sabarmati. Ahmedabad is also the capital city of Gujarat. Every year people from all around the world, travel to Ahmedabad to be a part of the celebrations and the festivals in Ahmedabad.
Ahmedabad is considered as a place that breathes harmony and possesses a background of delicate and beautiful art. Ahmedabad is also known for the memorials and the beautiful historical and archaeological sites that it possesses. Sultan Ahmad Shah was the founder of Ahmedabad and it is after his name that the city has been named. Ahmedabad was founded in the year 1411 AD and consists of glorious structures found all over the city.

Ahmedabad is the land of festivities and fairs and the main reason behind this is the fact that any sort of celebration or festivals takes place in a grand manner throughout Ahmedabad. In Ahmedabad, you will find that there is one particular festivity for every occasion, be it the change of seasons, occasions of religious significance or the time to celebrate the harvesting of crops.
The festivals in Ahmedabad and even the fairs are based on lunar and solar calendars that were used traditionally for astrology. The different fairs and festivals in Ahmedabad enable the tourists and the locals to catch some glimpses of various traditions and cultures of Gujarat. 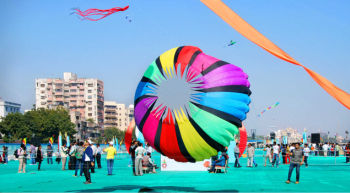 The international Kite Festival in Ahmedabad is also known as Uttarayan and is particularly a Gujarati phenomenon where the skies in Ahmedabad are found to be filled with kites and this phenomenon starts from before dawn until dark.
This festival is celebrated during Makar Sankranti which is a day that marks the beginning of summer after winter. This day is us ually very bright, warm and sunny accompanied by brisk breezes that help in lifting the kites aloft.
This day is a declared as a state holiday where all the normal activities during the day are stopped and everyone is found on the roadways and the rooftops flying kites and competing with their neighbors.

When: Celebrated every year from January 9 - January 14

The Process of Flying Kites

cut the strings of their kites and to bring their kites down.
In order to emerge winners, people try to take the services of the best kite makers in Ahmedabad who possess the expertise to create kite bodies that are strong resilient. The kites are mainly prepared by the use of bamboo frames that are springy and papers that are specially manufactured for making kites.
But it has to be kept in mind that the kite papers should be stretched in the right tension otherwise the kite would not be useful or the competition. The last thing to do in this respect is attaching the kites to one spool of manja which is a special string for flying kites made up of a mixture of glass and glue that is sharp enough to be able to cut the strings of the rival kites.
In the beginning of November, all the major streets in Ahmedabad are found to be filled with kites of various sizes and shapes. Infact, there is a special market named Patang Bazaar found in Ahmedabad which is open twenty four hours in the week preceding the kite festival.

The Ahmedabad film festival is also looked up to by the people of Ahmedabad because this festival marks the celebration of some of the most famous films made in Gujarat and the showcase of these films or children and adults.
The Ahmedabad film festivals also helps in the promotion of the films made in Gujarat along with the talented people found in Gujarat and Ahmedabad so that they can get a better chance in other wide markets of film found around the world.
This is one festival in Ahmedabad that does not include the entire population of Ahmedabad because most of the people are found to be busy doing their own activities during such festivals. The international film festival Ahmedabad also works as a scope for the people of Gujarat and the talents found in Gujarat to be a part of the entire world. It works as a platform for the showcase of such talents in front of the world.

When: Celebrated every year in the month of August

The meaning of the term heritage has changed recently because in today's times the word heritage means not only the living traditions and the monuments but also the arts, the music and the rituals that people practice in common.
The heritage film festival is one festival celebrated in Ahmedabad is focused towards celebrating the diversity of artistic traditions and the artistic skills found in the people of Gujarat.
This festival is considered to be very important not only in Ahmedabad but throughout Gujarat because of the contemporary life that it exhibits. The main aim of this festival is the encouragement of film submissions, the organization of projects related to film making, the review of film competitions and the screening of films to audiences from different fields.
The film festival also incorporates organizations and individuals that are related to films, heritage and design. The international communities and the tourists who visit Ahmedabad from time to time are also considered to be the target audience of this film festival. The heritage film festival is one project that has been initiated by aadhar and the mission of this project is to promote the heritage of India through films.
For encouraging the preservation of the cultural legacies and the heritage of India, aadhar promotes the heritage film festival in Ahmedabad by the use of audio-visual media. This festival took place for the first time in 2012 between 19th and 25th November and covered various aspects related to the heritage of India through films.
Nowadays the organizers of this festival are trying to take the festival across various countries internationally so that all the major audiences outside India can also be reached and the promotion of the heritage of India can be done in a better way.
When: Celebrated every year in the month of November 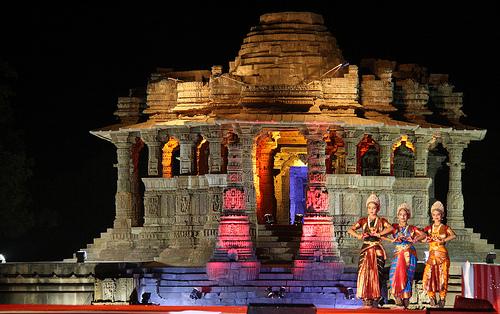 The Modhera dance festival is very famous throughout Ahmedabad. The Modhera dance festival dedicated to Lord Shiva and it is only because of his reason that this festival takes place in Sun temple.
Classical dances that are very Guajarati in form are the main attraction of this beautiful festival that carries on for three days in the month of January.
These are some of the most famous festivals in Ahmedabad that people from all over the world look upto and these festivals are even famous outside Gujarat.

When: Celebrated every year during the third week of January

As Ahmedabad celebrates all these festivals every year, it is known as one of the most culturally vibrant Indian cities that is popular all over the world!