Little is known about the origin, conception and construction of the Darya Khan tomb; the same goes for the person after whom the monument was built. The idea behind the construction of the tomb is also based on assumptions.
However it existence is enough to pull architecture enthusiasts and tourists alike. The importance of the tomb of Darya Khan is in the number of firsts usaed by this monuments in terms of construction methods- the most important being the use of baked bricks. 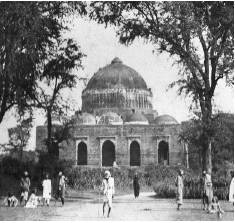 Darya Khan’s Tomb - The Monument Without a Past...

It represents the monumental beauty in itself that holds almost the same glory and aura even today. Not too much about the person in whose dedication this tomb was built is known, and most assumptions are based on varying accounts. The ethereal monument lies in the northern suburbs of modern-day Ahmedabad, presents almost unparalled in visual as well as architectural context. It was constructed in 1453 in the then capital of the flourishing sultanate of Gujarat.

The majority of tombs of the period in Gujarat are built using local post and lintel or trabeate methods of construction in yellow sandstone. What makes this construction different from the rest, putting it in a league of its own is the innovation applied in its conceptualization, design and execution. Firstly, it is built using baked brick, a building technique not so common in the constructions of that period and secondly the different approach taken by its architects who chose to use true arches and domes according to accurate methods to create spacious interiors in which the monument is housed with a surrounded arcaded verandah.

It is fascinating how five entrances are used on each of the four sides. The most important feature of this monument is that it is built of brick, unlike the other monuments in Gujarat which are built of stone. Around the central domed chamber, one can find a mind boggling, sixteen cells covered in smaller domes, creating this beautiful corridor around the tomb. Each face of the tomb has five arched entrances corresponding to the smaller domes.

The tomb of Darya Khan is by far one of the most complex monumental creations of the period. It was revolutionary in more than one ways, when compared to the other monuments created in the period preceding as well as contemporary to the mosque. The tomb is a must visit for enthusiasts of art and architecture as it was a turning point in the way edifices were ideated, designed and executed, not to forget it was the first construction to go for brick walls instead of the popular, tried and tested stone walls which they had mastered by this point of time. This can also be seen as an experiment or an innovation that worked and influenced the latter monumental creations. The shift was clear and brought about a more viable construction device that was faster and more convenient.

While visiting the mosque, turn on your keen eye to enjoy the exuberant as well as a brilliantly conceived architectural idea. Spend time observing the interiors, the division of space and the dynamics employed by the path-breaking architects of the mosque. You will be able to tell the difference by yourself, after you’ve visited the other Ahmedabad based monuments and are in a position to compare it to that of Darya Khan’s design and construction.

To those who are not so inclined towards art and architecture, the tomb is a perfect place for some serene peace, reflection and recollection. Like the other mausoleums of the city, this one too has its own distinct ambience and generic feel to it. Take a walk around the premises and it will envelope you in its peace and calm.