Colonel Shah Pir is a Dargah dedicated to a British Leiutanant Colonel William Carden, and definitely one of the out-of -the-box places to visit in Ahmedabad. 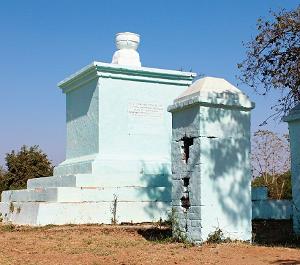 The shrine, associated with the faith of Kheda villagers, today serves the best example in itself. Whenever they get trapped under debt or encounter a serious problem with their children, they go no-where but Colonel-Shah Pir in a hope that their wish will be granted. This place is definitely an odd one out and a most interesting site to visit in Ahmedabad. After all, who had thought a Dargah built in memory of a British army officer?

William Carden was a British army officer from the pre-Independence era to have a Dargah in his name. The Dargah is located on a small hillock on the bank of the Shedhi river in Ratanpur village in Kheda district. Very fondly called the Colonel Shah Pir Dargah by the locals, the shrine used to have a gate and wrought iron fences which couldn't stand the test of time and perished.
When at the tomb, do not miss taking a look at the inscription on the tomb, which reads "This tomb was erected by the officers, non-commissioned officers and men of the 17th Light Dragoons, to the memory of 3 officers and 173 NCOs and men, who died of fever while the regiment was quartered in Ratanpur in 1813. Restored by the 17th (Duke of Cambridges Own) Lancers, 1913."  The restoration 100 years later had obscured the identity of the man interred, but the regimental history of the 17th Light Dragoons offers an answer into why he was loved by the locals.

The Legend of Colonel Shah Pir

Colonel Carden is known to give away even the government money in order to help the poor. He even fought with the then rulers for exploiting them. Though the Lieutenant Colonel left this world in November 1817, but his legacy as a good Samaritan during that time has been surviving even 200 years post his death and will be carried along in the times to come. Interestingly, this soldier-saint is revered by both Hindus and Muslims, for the fact that he helped the people during their trying times like epidemics and famines and also from vandalism of Pindari robbers.

You will be amazed to see the offerings to the great man. The Muslims get boiled eggs along with cigarettes and English liquor, as offerings. Hindus, on the other hand, offer stuffed toy horses, as a thanks-giving token on fulfilment of their wish.

Location: Colonel Shah Pir, Dungar (On the banks of Shedhi River), Ratanpur Village, Disctrict Kheda
Ahmedabad
Open Days: Accessible all seven days of the week.
Timings: It is advisable to get there by early morning till about noon, and in the evenings after 4 PM and before 7 PM. The summers in Gujarat are harsh, thereby avoid afternoons.
Entry fees and admission: There is no entry fees.
Photography: Not restricted

When to Get There

Visiting the Dargah between the months of June and October would be a good idea. Post monsoons the Shedhi river is brimming with activity and the otherwise dry Kheda is lush green and serene. Also the drive from Ahmedabad to Kheda is a pleasant one, with lots of good spots to stop by on while on National Highway no. 8.

There are very few places that stand out for being just sheer different. This one is just that place. It may not have a monumental feeling to it, but it sure does have a heart of gold, just like the man it stands for.

Kheda is roughly 40 Kilometers from Ahmedabad and is about a 45 minute drive. You may take the National Highway no. 8/ SH 150 and turn left from SH 60 leading straight to Kheda.