Calico Museum of Textile in Ahmedabad

Little did Pt. Jawaharlal Nehru know,  then in 1949 while he inaugurated the Calico Museum of textiles that it will be earning enormous repute as an institution, in following years; though he had expressed the importance of textile manufacture right from the inception of a civilization to its succeeding eras. Today Calico Museum lives and breathes this motto. 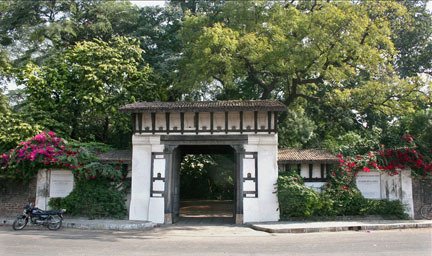 By 1971, the House of Calico decided to let the museum function as an independent society. The museum by now had reached another level altogether, boasting of an excellent collection of diverse fabric and a back bone of an invaluable bounty of research conducted by the publications department.

The museum stands as one of the most important textile repositories in the world and a relevant Indian institution. It holds an outstanding collection of Indian fabrics and handicraft textiles of five consecutive centuries, serving as a great research hub for research scholars as well as an interesting place to visit for tourists.

This accomplishment would have been unimaginable had it not been nurtured by the scholastic vision and administration by industrialist and scholar Gautam Sarabhai and his sister Gira Sarabhai. Others genius minds associated with the institution are Alfred Bühler, Moti Chandra, John Irwin and the current Chairman, Sh. Pupul Jayakar.

The Museum was ideated and inspired by Dr. Ananda Coomaraswamy. It is him who suggested Gautam Sarabhai to lay the foundation of a textile institute in the city of Ahmedabad, which is a major textile hub.

The Museum’s publications wing, now covers two diverse directions: the increasing number of publications working on historical aspects of the museums being one, and the research and publication of studies dealing more with the technical and scientific aspect of textile processes viz. looms, printing etc, being another.

In order to accommodate the museum collection two different sections in the Retreat complex were used namely, the Sarabhai-ni-Haveli, and the surroundings of the old swimming section known as 'Chauk'. The Haveli displayed the section called 'Religious Textiles' that included the Vaishnava and Jain artifacts. While the section around the pool, decorated with facades of carved wood was used to display tents, carpets, costumes and textiles of the Mughal and Provincial eras of the country. It is beautifully transited from one section to another aided by sprawling lawns, green avenues and a bridge over a pond blushing with Lilies.

Textiles and Other Artwork on Display

The museum displays a variety of textiles related to Mughal era spanning from 15th to 19th century.

The display also includes tie-dyed textiles and religious textiles and other artwork like liturgy art and sculpture, temple decoratives, miniature murals, bronzes from South India, Jain artifacts and sculpture, furniture work and crafts. You can also take a look at the textile techniques galleries and an in-house library.

Important Note: Please avoid carrying bags, cameras and cell phones. They can be allowed only on special permissions. Avoid taking photographs and video without permission. The Reference Library of the Resource Center is available by prior appointment. If you wish to visit the Botanical Garden, you can arrange a tour through the Reception.