When it comes to the history of Ahmedabad, Bhadra Fort stands as an important part of it. The fort was built in the year 1411 AD, by the then ruler Sultan Ahmed Shah. The city Ahmedabad was named after this ruler since he was the one who laid the foundation of the city.
The entire old Ahmedabad city was covered with the huge and deep red colored sandstone walls of the splendid fort. This fort is spread over an area of 43 acres with the beautiful lush green garden and a grand pavilion. 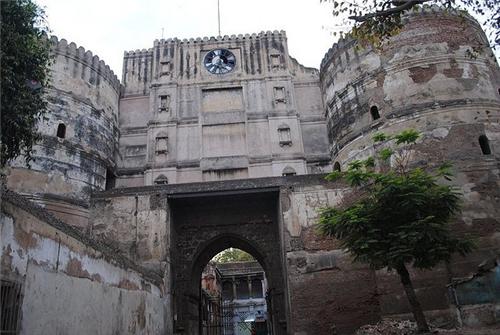 The Structure of Bhadra Fort

Undoubtedly, Bhadra fort is known for its excellent architecture all over the world. The fort featured royal palaces, awesome Nagina Baugh and magnificent Ahmed Shah Mosque on west side of the fort. On the east side, there is an open space called as Maiden Shah. The fort had a majestic city wall with 14 minars (towers), eight gates, and two large openings.
The fort also has beautifully carved arches, windows, gates, balconies, with aesthetic Jali works. The Bhadra fort also has Teen Darwaja on the eastern side of the fort which attracts the tourists in an amazing way. This gateway obliges as an entrance to the Royal Square of the fort.


Inside the Bhadra Fort

Inside the fort, the tourists are generally allowed to visit the rooms of the kings, the dungeons (place where the prisoners were kept), and the royal court. Another highlight of the fort is the view from the roof of the fort. Tourists are allowed to reach the roof. From here, the whole surroundings of the city can be watched.

Government Offices in the Bhadra Fort

Currently, the fort features few of the Government offices such as Archaeological Survey of India, Post Office, and the city’s Civil Courts. Another important tourist attraction in the fort is the city’s first industrialist’s statue and the Sidi Sayed Mosque. In recent days, the venue of the fort is more often used for the purpose of celebrating the country’s Independence Day and Republic Day as well.