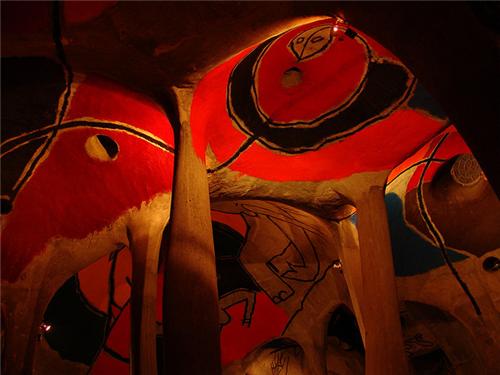 Amdavad ni Gufa: Where the Genius of Architecture meets the Celebration of Art..

What makes this visit all the more special is that it was designed by the celebrated duo of architect Balkrishna Doshi and ace artist Maqbool Fida Husain. This one of a kind gallery creates the perfect concurrence of art and architecture. The cave was conceptualized when M.F. Husain was on a visit to Ahmedabad.
Over a set of talks with his friend B.V. Doshi he suggested the creation of an art gallery for the exhibition of his works. This is where the Gufa was born, as they decided to erect an underground gallery that would be unaffected by scorching summer heat Ahmedabad experiences.
The Cave: It cases a natural cave inspired by the caves of Ajanta and Ellora in a contemporary design. The domes of the caves are designed to resemble the shells of tortoises and bubbles; and are covered in a mosaic of white tiles created using broken ceramic crockery and waste tiles. The premise of the Amdavad ni gufa was created in phases. After the main cave was constructed, the additions to the premises in the form of the Zen café, and a separate art gallery for exhibitions were made.
Art Gallery: The art gallery derives its name from Ahmedabad (Amdavad in Gujarati) and caves
(called Gufa in Gujarati) There are lot of interesting themes incorporated in the design and construction of this gallery.
The gallery space is designed like an underground cave with a partially covered set of stairs that leads one to the circular door and into the cave. In spite of being an exhibition space for paintings, the gufa does not compromise on its cave design. The cave has no straight walls. It continues with the curved wall pattern extending from the dome to the floor.
In a bid to keep the look resembling to those in actual caves, the dome structure rests on a set of columns that are designed to look like the formations of a natural cave or like a maze formed by the trunk of trees. The hall has a beautiful light play mechanism, where light is carried in through the openings on the domes. It’s fascinating to see the movement of light creating spots of light that move all over the cave as the day progresses. If mesmerising was used to describe anything best, it would be this. 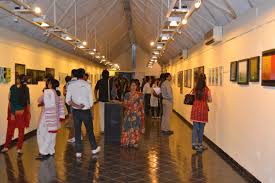 Hussain's Paintings: The walls of the Gufa are decorated by the paintings of M.F. Husain. The late celebrated artist painted on the walls with bold strokes and bright colours, creating a beautiful panorama of human figures and animals motifs. You will also see horse figures, a recurring theme in Husain’s work.
The idea behind painting on the walls, using it as a canvas was to create a look for the gufa like an ancient cave with wall paintings in it. Husain also actively participated in the designing of the interiors of the gufa contributing to the designs of the doors amongst other features. Do not miss the Sheshnag among Husain’s wall paintings that stretches over an impressive space 30 metres.

By Air: Sardar Vallabhbhai Patel airport, Ahmedabad is an international airport with direct flights to most international hubs. The Domestic airport connects all major Indian cities too.
By Rail: The main railway station is located in Kalupur area and is connected to all major cities of India.
By Road: Gujarat has a well connected road network. Ahmedabad is connected with all major cities and towns by road. Prominent bus stops are located at Gitamandir and Paldi. Regular bus services are available by Gujarat state transport buses (GSRTC) connects all major cities of Gujarat to Ahmedabad. Private transport options are also available.