Western Railway is one of the most important and highest revenue earning division of the Indian Railway and the second busiest station on this division is the Ahmedabad Railway Station. Ahmedabad Railway Station, also known as Kalupur Railway Station, is the busiest station in the state of Gujarat and the second highest income generating division after Mumbai on the Western Railway. It is referred by locals as Kalupur in order to differentiate itself from the other suburban stations close to it like Maninagar, Vastrapur, Sarkhej etc. The station code for booking tickets is ‘ADI.’

Ahmedabad railway station has a total of 12 platforms which are well equipped with Tea Stalls, Snack Bars, Medical Shops as well as enquiry counters. There is also a cyber café at the station that is run by Tata Indicom.
There are plans to make the station to be Wi-Fi enabled that is being considered by the government of Gujarat. The railway station also has a push trolley service for carrying the luggage, a facility which is common at airports.
The facility is only currently available on platform number 1, and will extend to all other platforms once all escalators are activated by the end of the year. A golf car service was launched to ferry senior citizens and handicapped citizens to the platform in 2010.

Over 50 trains towards various parts of the country depart from the city of Ahmedabad. Their timings, frequency are mentioned in the table given below: 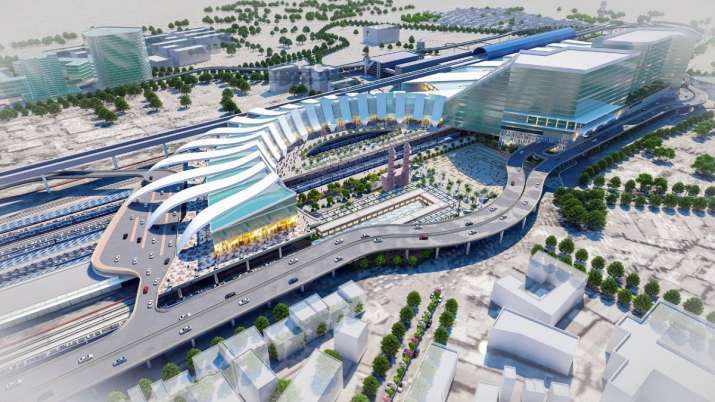 There are several hotels near Ahmedabad Railway Station. You can consider for them for a nice and pleasant stay. Being close to the railway station, it becomes really very easy to reach the railway station on time. Here's a list of these hotels: